You’ve surely heard us talking about it for some time now – our new and powerful form Editor!

In case you haven’t got your hands on it already, now’s your chance. We’re rolling the Editor out for everyone this week. While inside the old Editor, you’ll be prompted by a message at the top of the page to make the switch.

So if you’re eager to use it, click on the button below and start having fun with it!

GET THE NEW EDITOR

We’ve added in a whole bunch of improvements that will make your form building experience even better than before.

First off, we’ve remade the interface by simplifying everything to make it much more intuitive and friendlier. The drag and drop gesture feels as natural as assembling Lego bricks, with form elements fitting in perfectly wherever you want.

To take full advantage of this change, we’ve brought the Themes section inside the Editor so you don’t have to change screens when you’re fine-tuning stuff around. This way you can get really creative by seeing the form change style in real-time when editing it from the sidebar menu.

In terms of performance upgrades, you’ll have to strap on your seat belt from now on – form rules now run up to 100x faster! That’s right, no more friction or delays for your customers. Besides the speed, the new Editor was built on a very flexible architecture. That means we’ll be releasing new features much more frequently than before.

How will this affect your forms

Since the new editor has been completely re-written, your form’s themes will be affected. We have added a way for you to import the old themes you’ve created to the new version of the editor. To do this, you’ll have to go to Themes -> Change theme -> Import themes. You can also do this by migrating the form to the new editor through the message on the top. After the form has been migrated, you will see a green confirmation message with a link which automatically migrates your old themes automatically.

Your other settings and form fields will remain the same, so don’t worry about having to build the forms all over again!

As we’ve mentioned above, the new Editor is now live for everyone. To enable it on your account, follow these steps:

1. Go to your forms and select to edit a form

2. Once inside the Editor, a message will appear prompting you to migrate this form to the new Editor. 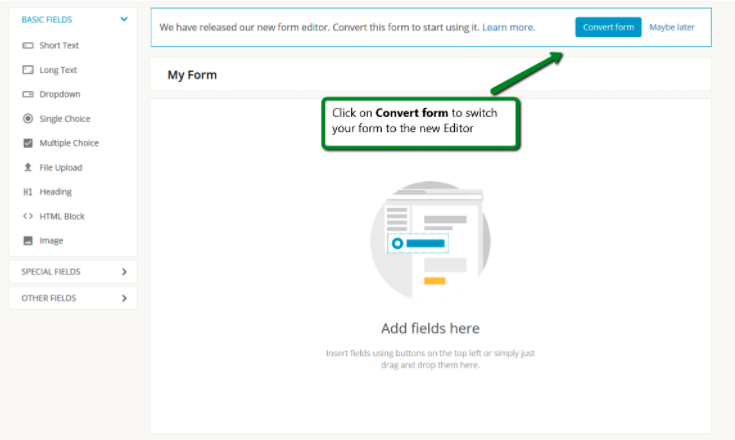 So, what are you waiting for – go try the new Editor out yourself!

GET THE NEW EDITOR

In case you run into any problems, don’t hesitate to contact our support team – they’re standing by to help you make a smooth transition.

Add your Team and Start Collaborating

Get Organized with Grouped Answers

All You Need to Know About Your Wix Starter Plan

Accepting Payments In Square With 123FormBuilder

You love forms as much as we do?

Then share your form story with us! We will read all the submitted cases and reach out the selected ones for further details. The chosen ones will have a case study created and will be featured in our blog, newsletter and social media channels.